Head back to the video libraries of the decade that taste forgot in these two thrilling, ghoulish mysteries for Michael Sands' Monster of the Week mysteries inspired by classic 80s splatterfests Hellraiser and Halloween 3: Season of the Witch! Fight demon nuns, reanimated serial killers, robot tech-bros and regular old incels, and maybe try and save a game that totally isn't Fornite.

CONTENT WARNING: 18+ recommended age. The zine, in particular the adventure All Are Punished, touches on some very mature themes, including gender based violence, fascism, incels, torture and implied incest.

In order to download this TTRPG scenario you must purchase it at or above the minimum price of $5 USD. You will get access to the following files:

Videostore - A Monster of the Week Double Feature.zip 37 MB

Videostore is a double feature of adventures for Monster Of The Week.

It's got strong art and layout, and---despite the clear 80s aesthetic---its scenarios are designed for the present day.

However, content-wise Videostore is definitely not for ages 12+ the way Monster Of The Week is.

I'd say it's 18+ at minimum, and both scenario's monsters are themed heavily around misogyny. There's small text content warnings before each scenario, but none on the game page right now, so consider this a

The first of Videostore's scenarios (Like, Comment, Subscribe, Die) commits 100% of its energy to being topical and, using its own language, it's about evil techbro incels running fortnite.

None of this is remotely ambigious. It says this very outright and in stronger language than I'm using. The monsters have abilities like sealioning and dogwhistle, and they periodically glitch into cryptofascist signaling.

I wasn't super prepared for it to be this on the nose, so it sorta took me aback for a second, but the underlying bones of the adventure are okay and the GM has a lot of elements they can add to a scene to advance the plot. It's definitely not for everyone, but it's an interesting modernization of Season Of The Witch.

The second scenario, All Are Punished, riffs off of Hellraiser (and maybe also a bit off of Child's Play.)

The overall tone and aesthetic for AAP remind me slightly of Rafael Chandler (Pandemonium, Mask Beneath Her Face,) but whereas Chandler tends to do aesthetic gore and demons in a way that feels like an 80s slasher or a Spawn comic, AAP has a noticeable exploitation vibe in the mix. I would urge folks both to only play this with a GM you trust and that communicates well, and also to have several safety mechanisms on deck when and if you do.

I'm not wrapping AAP in quite as much caution tape as I would put around something like Delta Green's Lover In The Ice, but really, really check with your group first about the material before you run it, and have a mechanic on deck to emergency-stop gameplay and check in on folks if you or anyone else gets uncomfortable.

Compared with Like Comment Subscribe, AAP is much more effective horror, and it hits a balance between grungy and psychological and nasty, but it is also even moreso about predators and bad things happening to people, and there were multiple places in the text where I thought "I don't know that I would want to depict this, even for a group that is enthusiastic about the module."

Overall, I wouldn't say Videostore was what I was expecting. It's significantly darker in tone and theme than "thrilling, ghoulish mysteries" had me ready for. If your group likes really dark B horror and you have good safety mechanisms, this might be something to take a look at. If not, or if anything I said in this review pinged your caution sense, probably give this one a miss.

Hey! Thanks for the write up, that's an excellent summary. I'll definitely add a content warning on the game page, thanks for the nudge. All Are Punished gave me nightmares when I was writing it! 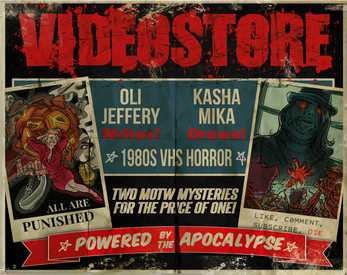